Gender and ethnicity pay gaps: how businesses can improve equality

While there has been a significant focus on diversity, are companies equally good at inclusion, once people join the business? Data around pay gaps suggest that there is still much to be done to ensure equality for women and people with an ethnic minority background.

We take a look at the latest trends and changes that companies can make to ensure their pay is more equal.

The positive news for women in the UK is that gender pay gaps are closing – at least in businesses where gender pay gap reporting is mandatory. Research shows that in companies that are required to report the differences, the pay gap has decreased by an average of 19%.

However, the pay discrepancy remains. In 2020, equal pay day was 20th November, representing the day when effectively women stopped earning for the year in relation to men. For that year, the pay gap in the UK was 11.5%. For the EU as a whole, that figure is 14.1% and has changed very little over the last 10 years.

There are numerous reasons for pay discrepancies. Data from the US suggests that men tend to ask for higher salaries for the same role – 65% of women asked for a lower salary than their male counterparts at the same business.

And even in the current times, caring responsibilities fail disproportionately on women. Data from 2019 shows that 28.5% of UK women with children aged 14 and under had cut their working hours due to childcare, vs just 4.5% of men.

The impact of the pandemic has worsened the situation in the UK, with 43% of women taking on childcare, vs 29% of men. Women spent an extra 1 hour 18 minutes on childcare vs their male partners.

New data from the US showed that the inequality in childcare had a big impact on employment. In families with different-sex relationships, where women did 80-100% of the childcare before the pandemic, 50% voluntarily left their job or reduced their hours in April 2020. Where childcare was shared more equally (40-60%), the probability of leaving jobs or reducing hours dropped to 15%.

Additional data from the US showed the long-term impact too. One in four women were considering leaving work or downshifting their role, vs one in five men. The three groups most impacted were working mothers, women in senior management positions and Black women. The impact of the pandemic could therefore have a long-term impact on both gender and ethnicity pay gaps.

While the issue of gender pay gaps has been discussed for some time, ethnicity pay gaps have been reported less. That is changing, as this issue now has more visibility than ever before.

Data from PwC shows that more UK companies are publishing on their ethnicity pay gap – an increase of 18% year-on-year. 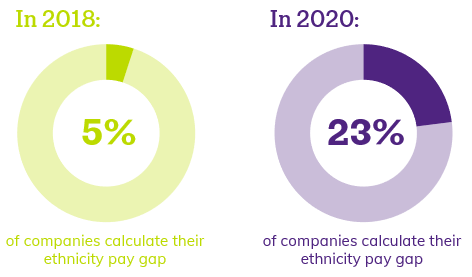 January 8th 2021 saw the introduction of Ethnicity Pay Gap day which aims to raise awareness of the issue and work to address it.

And while improved visibility is certainly helping, there is definitely more to be done. In the UK, the latest figures from the Office of National Statistics shows that the median hourly pay for employees from ethnic minority backgrounds is often lower than for White employees, although this is not the case for all ethnicities.

The figures vary according to region too, with a 23.8% ethnicity pay gap in London, 12.7% in Yorkshire & Humberside and 10.3% in Scotland. Wales and Eastern England have the lowest figures, at 1.4% and -8.6% respectively.

The government’s recent Commission on Race and Ethnic Disparities was initially expected to announce mandatory ethnic pay gap reporting for large businesses, bringing this in line with gender pay reporting. However, the final report stopped short of such a requirement, instead stating that “all employers that choose to publish their ethnicity pay figures should also publish a diagnosis and action plan to lay out the reasons for and the strategy to improve any disparities.”

UK business groups have stepped up in response to say that large companies should have a duty to report pay gaps between employees of different ethnicities. BITC also supports mandatory reporting. Data from as far back as 2018 showed that 73% of companies supported mandatory ethnicity pay gap reporting for organisations with more than 250 staff.

Some companies, including Sainsbury's, Deloitte and Network Rail, are reporting on a voluntary basis but, given the impact of mandatory gender pay gap reporting, campaigners are keen for a similar approach for ethnicity.

How companies can work to address pay gaps within their business

Fixing this issue is a combination of getting access to the right data and tackling the underlying causes. Here are some steps that companies can take:

Regardless of the size of your business and whether reporting the figures is mandatory, to close any pay gaps you need to know whether they exist and to what extent. For this you will clearly need to know the gender and ethnicity breakdown for each role, together with pay information. The UK government has useful guidance on how to calculate the figures.

2. Look at the distribution of roles for women and people with ethnic minority backgrounds

Equal pay has been part of UK law since 1970 so people doing the same job should receive the same wage. However, the situation can be complicated by nuances, such as experience or additional responsibilities, which can hide discrepancies between men and women and people from different ethnic backgrounds.

But importantly, pay information is intrinsically linked to the type of job – and it’s therefore not only important to look at salaries for a role but also to understand which roles are typically done by women and by people from ethnic minorities.

Data shows that ethnic minority employees often work in frontline roles and are under-represented in management and senior positions. Almost a fifth of FTSE 100 companies have no board members from an ethnic minority background and women still only account for 33% of all FTSE 100 board members.

Companies need to not only ensure that pay is equal but also understand the seniority of female and ethnic minority employees throughout the business.

3. Ensure a balanced talent pool when recruiting and include salaries in job adverts

If your business does have fewer female and ethnic minority employees at top levels, it’s important to look at your diversity initiatives to ensure that your talent pools are as diverse as possible.

One other key step is including salary information in job ads. As stated earlier, women tend to ask for lower pay for the same role, so asking people for their salary expectations can increase pay gaps. In addition, asking for current salary can perpetuate current pay gaps and maintain discrepancies. In the US, 19 states now ban companies from asking for salary history and data shows that as a result, when companies didn’t ask for this information, on average pay increased by 8% for women and 13% for Black candidates.

Companies offering transparency about salaries not only helps to close pay gaps but also makes for a better hiring experience across the board and helps improve employer brand perception.

It’s not enough to simply bring the right people into the business – you need to ensure that your company is inclusive in its approach to promotion opportunities. With data showing such discrepancies between access to higher roles for women and those from ethnic minorities, it’s essential that you review the process for identifying future talent, nurturing people in more junior roles and how selection decisions are made.

It’s clear that there is still much to be done in this area. If you’d like support with benchmarking your business and its pay scales or increasing the diversity of your talent pools, we can help.

If you'd like to improve diversity and inclusion within your business, our guide offers advice.

Get your D&I guide

If you're looking to reach your D&I targets, our free guide can help. It contains in-depth information about the latest diversity and inclusion trends, the key challenges for businesses and how to implement a successful D&I strategy and reap the rewards of a diverse and inclusive workplace